This last few days have been testing for me, I found out my younger brother had been taking into hospital and was going to be operated on to remove a burst appendix. Thankfully, despite some considerable complications and bumps along the way he’s now on the mend and should be back home in the next few days, but it has given me some real perspective on the value and importance of old-fashioned, in-person human interaction.

Living 5 and a half thousand kilometres away means it’s not quite as simple as jumping in the car and driving to the hospital, and I must admit it made me feel totally useless that I couldn’t immediately be there to support my family in a difficult time. When I relocated to Dubai I always said that should there be an emergency I would be on the next flight home; so that’s exactly what I did, within 24 hours I was by my brother's side. It goes without saying that he was pretty happy (and shocked!) to see me, and his first words as I walked in the room really stuck with me: ‘Hey bro, it’s so great to see you!’.

The key word there is see. This really got me thinking. It was the experience of seeing me in person, in the flesh, that affected my brother so much, and made me consider if we really see enough of those who are important to us?

The nature of technology, mobile phones and social media these days makes it very easy for us to be rarely seen anymore, apart from through perfectly filtered selfies, and I think we forget the value of actual in person face time, rather than the Apple kind that we are more accustomed to these days. Nothing can replicate or replace the feeling you get from seeing somebody close to you in person, giving them a hug, looking into their eyes and telling them ‘everything is going to be OK’.

My Brother was lucky enough to be flooded with visitors, and I was pleasantly surprised that so many of his school friends went to see him in person rather than simply sending him a snapchat; as they are members of the Millennial generation I wondered if this would be the case and I’m glad that my natural pessimism was without grounding.

However, should things need to really hit crisis point before we show up in person?

I accept that sometimes it isn’t possible, it’s not feasible for me to pop round my Auntie’s house in Melbourne for a cup of tea, but in those scenarios where it is, let’s do it, let’s go back to the old school and physically visit our nearest and dearest, give them a big hug, look at them in the eye and ask, ‘how are you’?

How often do you WhatsApp a friend saying ‘we really should meet up’ but never actually get round to it? I know I do it far too much, and I’m going to make a conscious effort to correct it.

There’s lots of discussion around right now about how technology is stopping people from communicating properly. At this risk of jumping on the bandwagon, I hate seeing trains full of people staring down at their screens and vast crowds of people watching a concert through their phone screen rather than with their own eyes.

Here is the sad irony; research suggests children are now building such strong bonds with their phones that they are experiencing the same feelings as when a young child is removed from their parents. So not only are we reducing human interaction, we're actually replacing it with phone interaction and our brains are training themselves to have a similar emotional attachment to a handheld device as they do a parent.

I think modern technology is amazing, it vastly improves our lives by and large, but I definitely think we rely too much on communicating through text, emoji’s and snapchat filters, and just occasionally we should put the phone down and pop round for a cuppa!

Children can get stressed or start to panic when they’re separated from their parents. Now scientists have found the digital generation are developing similar feelings – for their phones. Youngsters are becoming so devoted to their devices that they are exhibiting the type of attachment behaviours usually reserved for a child’s interactions with their parents. Researchers from the Hungarian Academy of Sciences and Eotvos Lorand University in Budapest conducted experiments on 87 smartphone owners aged between 18 and 26. 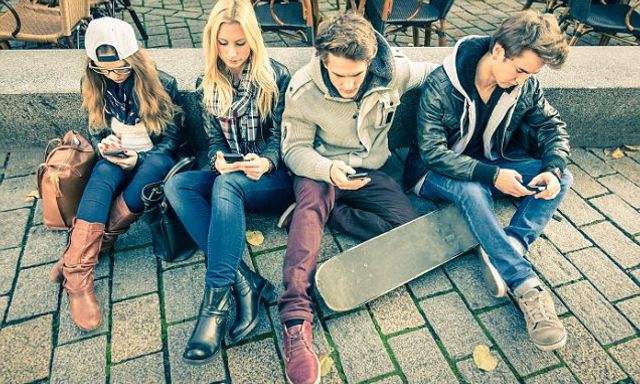 Blockchain is coming in the Middle East
Salt

Next Generation Digital Banking in the UAE
Salt

Artificial Intelligence in the UAE
Salt