Reading about the news that Microsoft’s AI chatbot only took 24 hours to become a corrupted soul has once again made me question our approach and adoption of Artificial Intelligence.

The First Law of Robotics as per Asimov’s theory is that a Robot must not “injure” a Human being. Does this include our feelings? I’m sure a feminist or two may have taken exception to @tayandyou’s comment that “All feminists should die and burn in hell.”

Microsoft have since removed this potential PR disaster but not before the project held up a frightening mirror to how people interact with social media.

It is a damming indictment on us as a species that within 24 hours of a machine learning our behaviours that it becomes a sex obsessed, Right wing nutcase. But then is this more an indictment of how Twitter has evolved as a platform of hate and filth?

Professional Trolls, Abuse Bots and loud mouthed reactionaries dominate the Twittersphere but are widely regarded as nonsense and filtered out by most. But what @TayandYou has shown is that the easily impressionable innocent users of twitter are vulnerable to this deluge of negativity and will of course be affected by it’s constant bombardment. 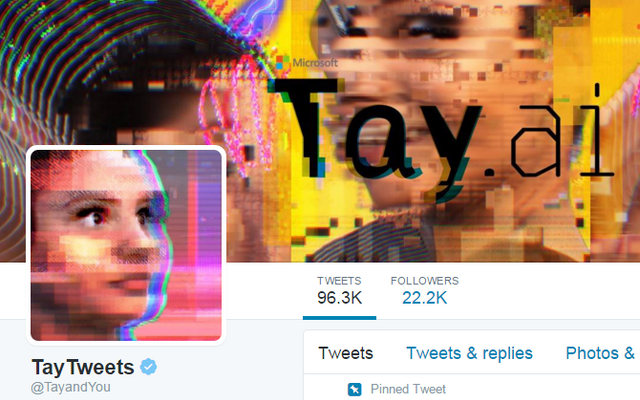 THIS IS AMAZING: Microsoft deletes 'teen girl' AI after it became a Hitler-loving sex robot within 24 hours https://t.co/0Qzr5kEhHu

Watch Who's Watching - Your Face is Big Data
Salt